Every year my hometown hosts an international fireworks festival. It usually last for a couple of days, so it’s a great opportunity to master photographing fireworks – in my opinion one of the most complicated things to capture with the camera.

But why are fireworks so difficult to capture properly?

First of all, when I say properly, I mean all of those things that make a great photograph – composition, exposure and some kind of a conceptional value – usually with story behind it.

How hard can it be, right? You set up your tripod, point a camera to the sky and wait for the fireworks to begin. You may know exactly where the fireworks are taking place, but you never now how high or wide it is going to be, so you need to be alert at all times and ready to rearrange you composition.

If you decide to go with the boring version of shooting only the sky, you probably won’t run into problems. Once you set your exposure, although some rockets will generate brighter flashes than others, you are pretty much good to go. At this point, exposure values will vary from, lets say 1/10 to a few seconds, depending on how far you are willing to push.

On the other hand, things could get a little complicated if you want to capture something else beside the fireworks. Let’s say you want to get a photograph of a couple of people watching fireworks beside the lake, like this one beneath.

If you want to get the coast of the lake as bright as that one on the photo, you are looking at at least a couple of second exposure, at a higher ISO setting. The problem is, if you do that, your fireworks will be vastly overexposed. And of course, in contrary, if you get the fireworks right, you probably won’t even see the coast of the lake.

The only solution to this is thinking outside the box. There are a few solutions, some more complicated than the others. The first one that came into my mind was to use an external flash and fire it by hand. Although the ex430 is pretty strong, the result probably won’t be so satisfying.

The second one is the general idea to expand the dynamic range. HDR is one of the option, but honestly, I doubt  this one too would bring a satisfying result.

The third option, and the option I used, is to just bring the two photos together. The coastline of the lake is the border of two photos.

Once you get your technique right, it’s time to put some conceptual value to the plate. As I said before, just plain photos of fireworks are pretty boring, but when you just bring a few people in frame, thing just get way more interesting. 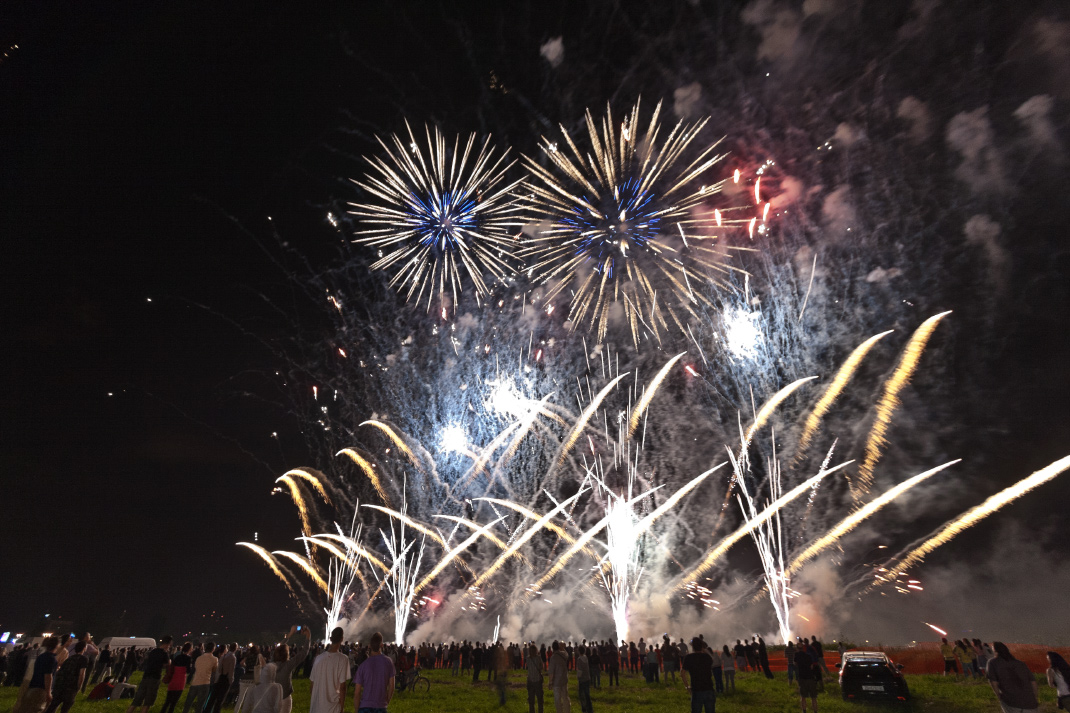 But in the end, it would be fair to admit that most of the time you just need a little luck. In 2007, at the last day of the festival, at the last fireworks, the last rocket, I somehow managed to capture this magical moment.

I get questioned a lot on what settings to use. The thing is – there is no universal setting for shooting fireworks. The best way to fireworks photos is just to experiment. The photo below wast taken with iPhone 4 (on auto setting of course). iPhone has a fixed shutter, the aperture is f:2.8; exposure is 1/15 of a second, and ISO speed was set to 1000. Trying the same on my SLR I was getting pretty decent results, but as I said before, it all depends what you are aiming for. Good luck.